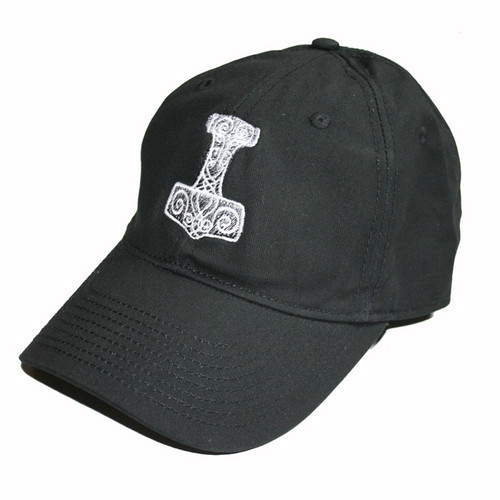 Thor's Hammer Embroidered Golf Hat/Baseball Cap. Black with silver/black and grey stitching...100% Cotton - One size fits all with adjustable strap back - Hey Viking...Keep the sun off your head!

One of Scandinavia's most famous leaders, Thor, the Norse God of Thunder and son of Odin and Jord, the Earth goddess, was the strongest of all the gods. It was believed that during a thunderstorm, Thor rode through the heavens on his chariot and when he threw his hammer, lightning flashed. Whenever he threw his hammer it would come back to him and thus symbolized lightning. Thor lives on through our calendar. The day Thursday was derived from "Thor's Day". Thor was also one of Sweden's most famous leaders, and still today his name is directly associated with Thunder. Steel was needed to produce hardy weapons. As the story goes, Thor was a very popular man in Sweden. The Goth's were metal workers and Thor was one of their best steel and alloy workers. The thunderous sound that Thor's hammer made while working produced works that were the admiration of every age.