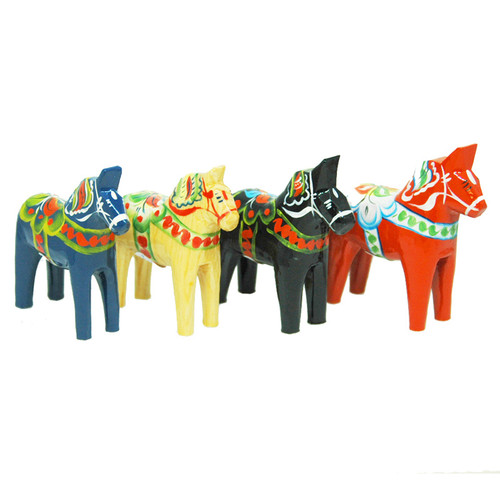 The Dala Horse (Dalahast) story dates back many hundreds of years to an area in central Sweden. In the Dalarna region, somewhere between Borlanga/Falun and Mora, the tales and historical significance of our little wooden friend exists. Carved out of scraps of wood by tradesmen, the Dala Horse embodies a part of Sweden's National heritage and is one of the icons of Sweden.

There is legend that the Dala Horse became the National toy in 1716 after Swedish soldiers fighting under King Charles XII were forced to seek quarters in the homes in the Dalarna region. The winter months were brutal in central Sweden and food was limited. Many of the men had left their vocation (wood craftsmen) to take part in war throughout Europe. The nights were cold and long and to pass the time, many of them would carve animals out of wood. They carved many types of animal figures including roosters and pigs but the most notable was the horse. The horse became the sign of good luck and these carvings were often given as gifts for their hosts for food or payment for room and board.

The Dala Horse has a sentimental, warm place in the hearts of many Scandinavians. Even today the horse represents qualities such as strength, faithfulness, wisdom and dignity. In rustic culture, if a farm had a horse it was a great help in supporting the family. Mora, Sweden's at the center of the Dalarna Province and at the center of the Dala Horse craft. The horse was the secure helpful friend in the field, the farm and provided transportation to the mill and the church. Many farms could not afford a horse and it is said that it was probably a farmer who realized he would never be able to afford his own horse so he created his dream horse out of wood. With knife and hand he gave the Dala Horse form and paint for decoration.