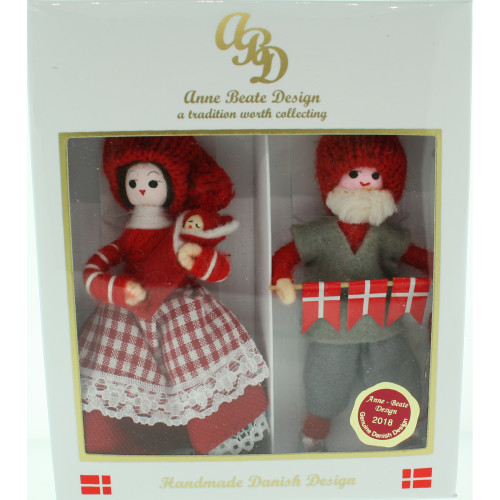 Danish Pixie Couple With Child  - These Santas from Denmark are 4.5 inches tall and are beautifully gift boxed for the Season of giving...Once upon a time, Anne Beate's mother had a small shop called Numb Skull Jack. It was situated nicely in Odense, Denmark just opposite Hans Christian Andersen's house. One cold November day in 1963 she came home and found Anne Beate sprawled on the couch with a stack of magazines. "This will not do, you'd better start making some pixies". "Oh, but I could never do that", Anne Beate answered quite alarmed. "Nonsense", said her mother. And this is how it all started. The first pixies were not easy. Anne Beate shed many tears and claimed that she would never learn. But she did - and after a while it was as if the pixies took over the job themselves. And this is how it has been ever since. Almost like a fairy tale. "A Tradition Worth Collecting"